It may come as no surprise to you to know but the American Airforce is currently deep into the developments stages of creating surveillance insects which can fly wherever needed to provide reconnaissance and intelligence without the enemy even knowing.

The small winged surveillance insect pictured below has no camera connected to it but shows just how far the research has already come. Also if the US Air Force is happy to show details of the developments you can bet the stage they are probably on at the moment is far removed from the image below. For more information on the development of these new surveillance insects by the micro-aviary indoor flight test lab watch the video after the jump. 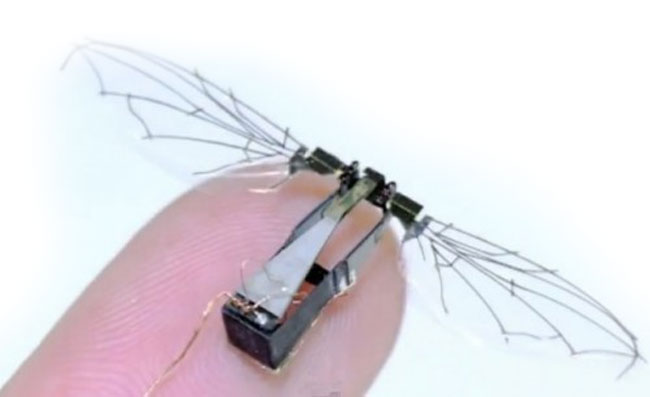 “At the Micro-Aviary at Wright-Patterson Air Force Base, researchers rig the walls with super-sensitive motion capture sensors that track a tiny plane or helicopter’s position ”within about a tenth of an inch,” according to researcher Greg Parker. Information from those sensors helps engineers develop “flapping-wing flight” drones — “very, very small flapping-wing vehicles,” in Parker’s phrase. And how. One of the vehicles on display in the video above, released by the Air Force Research Laboratory at Wright-Pat, is a robot dragonfly. It doesn’t appear to be much more than a circuit board, a super-tiny motor and two insect-like wings”

Once fully developed and service the surveillance insects would be indistinguishable from the real thing and would be extremely difficult to spot with the naked eye. Providing both audio and video reconnaissance capabilities feeding real-time footage back to the control centre.