Several months from now. Australians are an inventive lot. Blame it on the water or the space beer, but they’re an inventive lot if given the right inspiration. For Chris Malloy, it all began with a fateful helicopter ride. Long story short (and canceling out the obligatory anecdote), riding a helicopter compelled him to build an honest to goodness hoverbike for a more intense flying experience. 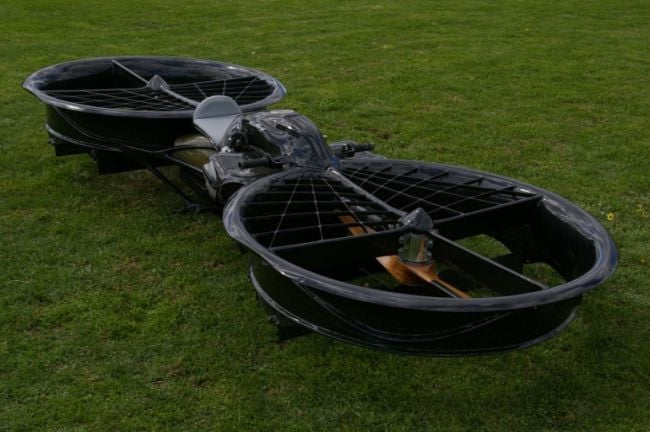 Seen above is the prototype if Mr. Malloy’s ambitious garage project. An enginner y day and hoverbike inventor whenever he’s got free time. Though the machine is largely finished, Malloy insists there are tons of details that need to be worked out. That, and he’s currently open to investors.

The current hoverbike model is basically a carbon fiber body and two donut rotor bldes. The inventor thinks performance-wise, his hoverbike can do more awesome stuff than a small helicopter (say a Robinson R22).

Here’s a juicy video to inspire your wonder:

It would be really cool if they got Avatar’s finest Sam Worthington to fly this hoverbike. Better if Sam were decked out as a Na’avi zipping across the skies Down Under.

On a parting note, perhaps Malloy should present his hoverbike to Chinese businessmen who are looking for an out-of-the-ox vehicle with potential. Them, and maybe the People’s Liberation Army Air Force.