The much awaited Google Nexus 7 tablet has started appearing in various retails stores across the country. Users in USA can get their hands on the shiny tablet from Google Play Store as well. At the event, it was announced that tablet will hit the markets globally but no specific dates were announced. It is expected that Nexus 7 will hit UK, Canada, Australia, Japan and a few more countries in the coming weeks. If you are residing in Canada and cannot wait to get your hands on the device, we have good news for you. Nexus 7 will be available for sale in Canada through Staples starting 31 July. 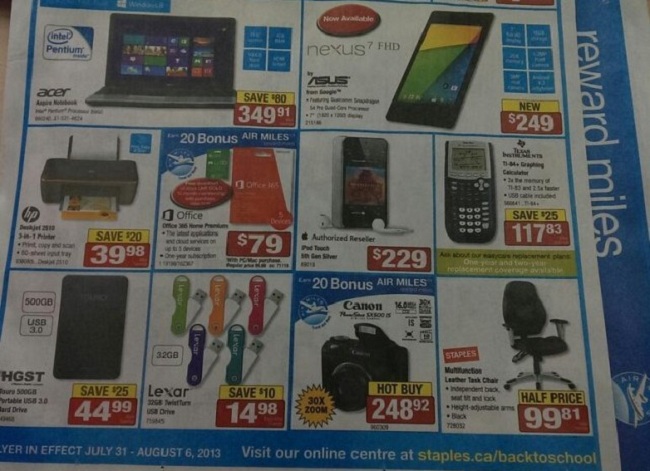 The news emerges from an alleged Staples ad that has been leaked on the internet. The flyer shows that the next generation Nexus 7 will be available for $249 for the 16GB version, which is $20 higher than the official price. There is no word about the 32GB variant but we suspect that it will be available for $289, a similar $20 higher than the original price offered in Google Play Store.

There is no doubt that many Android enthusiasts want to get their hands on Nexus 7 as soon as they can. So, if you cannot wait for Google to officially release it in Canada, wit for 31 July and get it from Staples. Although, you should know that the after sales support offered by Google is way better than any other retailer.