You may be familiar with the slingshot making German called Joerg Sprave. This guy has made slingshots for a long time and many of them are powerful enough to hunt with or kill zombies in the event of a zombie apocalypse. Sprave is back with something a little different. 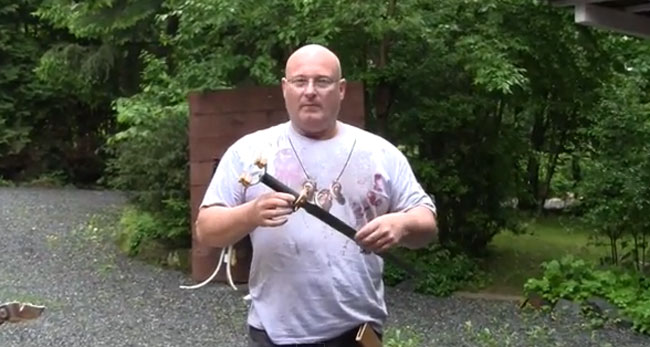 His latest weapon is a sword forged by a blacksmith named James Helm that has a slingshot attachment on the bottom of the handle. The sword is very short and appears to be incredibly sharp. Sprave says that the reason for the short sword is to make it easier to draw and use quickly. The weapon reminds me of a machete, but some people call it a slingblade.

It does appear that it would take a bit of time to equip the bottom of the sword with the rubber bands required to fire rocks or the little metal ball bearings Sprave uses for ammunition for the slingshots. The finished weapon definitely looks like something someone could hurt themselves with. The handle is constructed from a short piece of pipe, plywood, and various screws. Check out the video to see the slingshot sword in action.