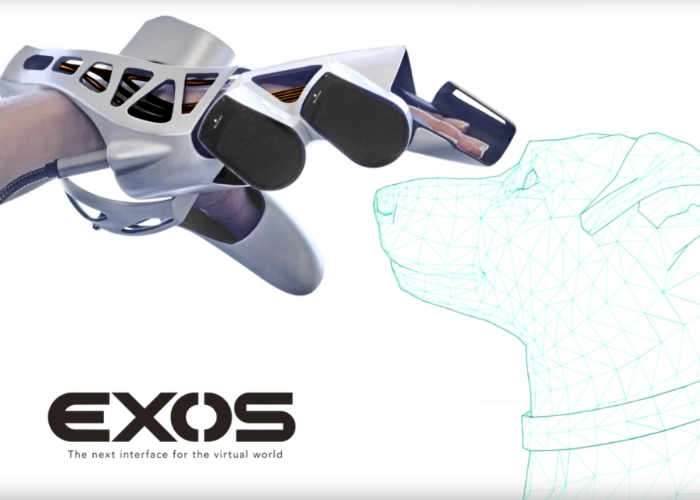 A new haptic enabled virtual reality glove has been unveiled this month in the form of EXOS VR glove which takes the shape of an exoskeleton hardware worn on both hands, to add further immersion to virtual reality worlds, games and experiences.

EXOS has been created to provide users with the ability to feel the sensation of touch in a virtual world, enabling them to interact with virtual objects using their hands and receive haptic feedback as they engage.

EXOS It’s capable of being used for a number of different applications from VR games, remote control of robots, rehabilitation programs based on hand movements, and more say it’s developers. Watch the demonstration video below to see how it can allow users to interact with virtual reality objects and receive feedback.

The Road to VR technology website explains a little more about the differences between the new EXOS haptic virtual reality glove and the already unveiled Dexmo VR glove which we have previously featured here on Geeky Gadgets.

Unlike Dexmo however, the EXOS adopts a more simplistic, less granular approach to the problem. Whereas Dexmo provides incremental resistance and finger extension tracking for all four digits and thumbs (per glove), EXOS offers individual thumb and then collective 4 finger movement and force feedback.

And whilst this might seem like a regressive step when compared to its other exoskeleton stablemate, it might turn out to be a smart design choice. By reducing complexity and sacrificing fidelity, EXOS’ design may prove more robust, with less moving parts in play and a simpler set of programmatic requirements. This is pure speculation at this stage of course, we’ve not had our hands on the device yet.

For more information on the new EXOS jump over to the official EXOS website for details by following the link below.