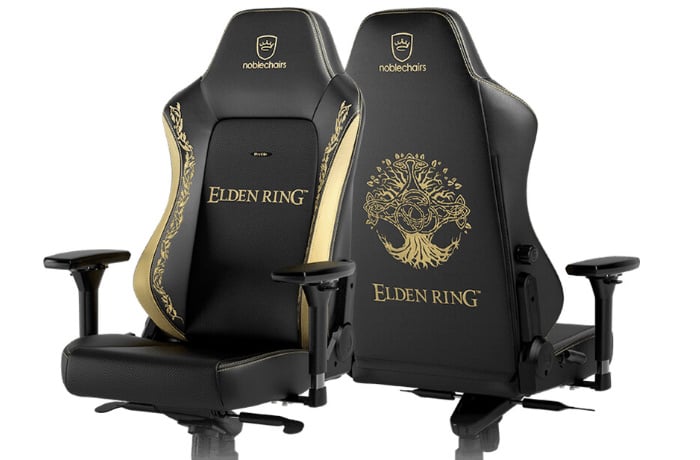 If your gaming throne could do with a little upgrading, you might be interested in a new Elden Ring themed gaming chair unveiled by Noblechairs this week. Equipped with 4D armrests and adjustable backrest the chair features a rocking motion and provides lumbar support.

The Elden Ring chair is the perfect accessory to help you enjoy the new game created by FromSoftware which will officially launching a few days time on February 25, 2022. From the creators of the Dark Souls series, Bloodborne and Sekiro: Shadows Die Twice the action role-playing game features a land created by novelist George R. R. Martin, who provided material for the game’s setting.

Elden Ring will be available to play on PC, PlayStation and Xbox games consoles both old and new generation and takes place in the realm of the Lands Between, sometime after the destruction of the titular Elden Ring and the scattering of its shards, the Great Runes. Check out the official trailer below to learn more about the game ahead of its launch later this week.

“Once graced by the Ring and the Erdtree which symbolizes its presence, the realm is now ruled over by the demigod offspring of Queen Marika the Eternal, each possessing a shard of the Ring that corrupts and taints them with power. As a Tarnished—exiles from the Lands Between who lost the Ring’s grace—summoned back after the Shattering, players must traverse the realm to ultimately find all the Great Runes, restore the Elden Ring, and become the Elden Lord.”

“Winning over 250 product awards, noblechairs is the proud bearer of a long and stellar line of positive feedback from its many wonderful customers. As a company dedicated to providing a premium range of comfortable gaming chairs, all with durability and ergonomics in mind, noblechairs is a German brand that takes pride in being seen as one of the best on the market.”