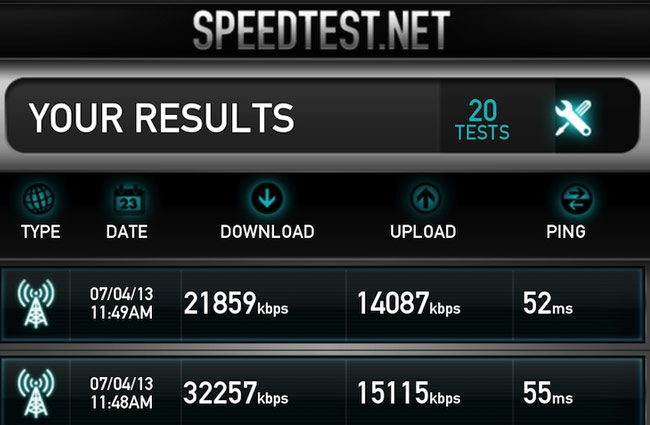 The EE 4G Double-Speed network was advertised as being able to theoretically be able to provide users with speeds unto 150Mbps but in reality you can expect to connect with speeds from 20-40Mbps.

The new EE 4G Double-Speed network is based upon some technical shuffling that pairs together extra chunks of spectrum. To be precise, rather than allotting 2 x 10 MHz as it was before, EE 4G Double-Speed now uses 2 x 20 MHz in the 1,800 MHz spectrum band, doubling the available speeds to customers. Slashgear who carried out the tests explain:

“We powered up an HTC One on EE and ran through some speed tests in various locations just outside of central London, with 4G indicated and between one and four bars of signal strength showing. Initial impressions were excellent: in a location where previously we’d seen around 13 Mbps down and up to 17 Mbps up, that jumped to over 42 Mbps down and over 22 Mbps up.

Moving round, though, we found things to be more changeable. 42 Mbps – higher, to be fair, than EE suggests – was the fastest we saw, while the fastest upload was just over 29 Mbps. More common, though, was a download in the low- to mid-20s and uploads around 20 to 22 Mbps.”

For more information on the new EE 4G Double-Speed First Speedtest Results  jump over to the Slashgear website for details.