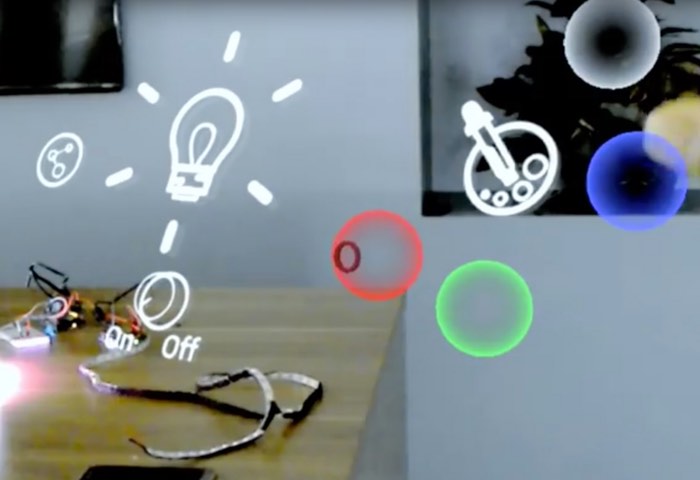 Maker Ian Sterling has developed a new Microsoft HoloLens application during recent HoloLens hackathon in San Francisco allows you to use gesturing and staring to control your smart devices.

The proof of concept application named “IoTxMR” allows a user to either simply glance their eyes at a smart device or use gestures to control commands or applications. Check out the demonstration video below to see the IoTxMR app in action.

IoTxMR is a proof of concept application developed in 48 hours at the Microsoft Holo-hackathon held in San Francisco. The primary goal of the app is to provide a 3D spatial UI for cross-platform devices — Android Music Player app and Arduino-controlled fan and light — and to interact with them using gaze and gesture control.

The connectivity between Arduino and a mixed reality device is something which holds a huge amount of creative opportunity for developers to create some very exciting applications — be it [Internet of Things], robotics, or other sensor data visualization. Besides this, our app features some fun ways to connect devices. Our demo featured a connection between a music player and a light in order to set a certain mood in your home.

If you are interested in creating Internet of Things projects or require a smart home hub you might be interested in our home automation hubs and system guide.