Following on from the shorter Call of Duty: Black Ops 2 Zombie trailer released by Treyarch last week. The company has this week released a longer 2 minute version of the trailer that reveals a little more of what you can expect from the game and the Zombie horde.

As well as releasing the new Zombie trailer Treyarch has also unveiled lots of details about the Zombie modes within Black Ops 2. That will include multiple modes, called Tranzit, Survival and Grief which caters for up to 8 players. 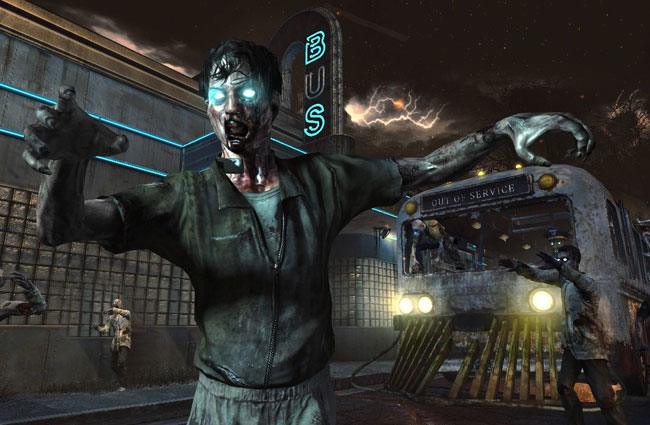 ‘Tranzit‘ adds scale to the original gametype, and acts as the primary mode for zombie players. Rather than be stuck in one location, players are free to explore a “big, giant, expansive world.” Calling it “significantly bigger than anything [Treyarch has] ever created,” Lamia promises players (playing solo or up to four-players co-op) can traverse on foot or via the bus featured in the zombies world premiere trailer above.

“Because it’s open and because there are multiple locations in this world where you can play and where the infestation is, there’s different strategies about how you can approach it,” he adds. “It’s a much bigger world with much more going on.” Moving through the world in the bus has tactical advantages, such as speed; however, it isolates players and can become very difficult to escape from. Going it on foot “into the fog” – which players can do by themselves or as part of the group – also has its perks, but puts players in the middle of danger.
To aid in their survival, players can collection pieces of items from throughout the world, putting them together to create “buildables”; including weapons, tools and things to help open new areas of the world.

‘Survival‘ has the “more classic zombies vibe,” where zombie aggressors attack the player within a single area from the “expansive” Tranzit world. From its description, things work relatively the same as they have in the past: hole up, fortify your location and venture out to grab bonuses scattered throughout the environment when you find the right moment.

Survival areas are “carved out” of the Tranzit world and customized by Treyarch to act much like dedicated maps. Though Lamia wouldn’t give an exact number, he promised players will have access to “multiple areas” in Survival that are designed to be played as a standalone section (solo or as a 4-player co-op experience). These areas feature the same gameplay zombie fans are used to, including magic items and ‘Pack-a-Punch’ machines.

‘Grief‘ is a new mode, available for up to 8 players that takes the concept of Survival and adds a competitive twist. In this mode, two teams of four players are dropped within the zombie-infested Tranzit world and must outlive the opposing team.

“This is what I’ve called in the past ‘4z4,'” Lamia says, detailing a mode that breaks down to a simple descriptor of Humans vs. Humans vs. Zombies. “It’s really humans versus zombies, because the zombies don’t care what team you’re on. They just want human flesh and brains.”

In this mode, human players cannot kill each other; however, they can play with the world to put the opposing team in precarious situations – hence the name ‘Grief.’ The last human team standing wins the match.

For even more information about the new Call of Duty: Black Ops 2 Zombie game jump over to the Joystiq website.