Chloe Holmes lost several fingers after a nasty bout of chicken pox in her infancy. We’re not sure which hand was affected (apparently both, but judging by the pic it’s the left that’s in worse shape). Until the age of 15, she had to make do with dull prosthetic replacements. Thanks to a sizable financial investment, Chloe has a new fully functional hand. After spending 38,000 quid on a bionic hand, Chloe can now consider herself a cyborg. In fact, she might want to start calling herself Chloe Ironfist. 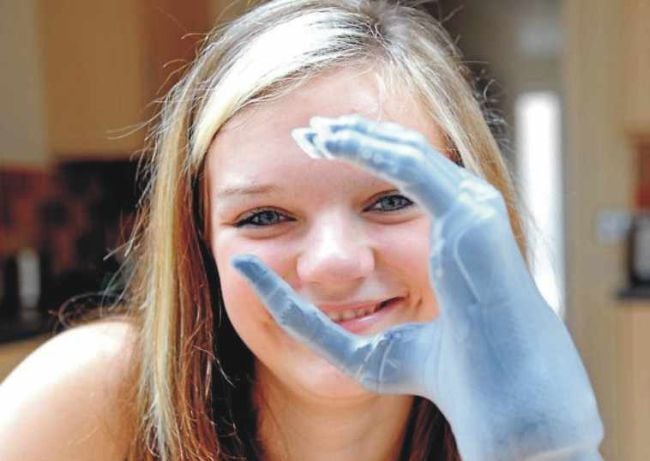 Jesting aside, the new hand is a serious piece of engineering. Chloe isn’t the first teenager to get a bionic boost though. Earlier this month another kid from the UK got a bionic hand sponsored by a car company and a hi-tech firm. For people who like putting two and two together, it might seem noteworthy that teenage amputees are the ones getting nice cyborg upgrades these days.

Upon checking other news sources, turns out the hand Chloe is wearing is from Touch Bionics as well. This means we’re looking at another variant of the iLimb Pulse, which has some really advanced hardware capable of precise activities and tasks, i.e. writing with a pen.