BAE Systems just dropped us an email to tell us about their latest invention, a body wearable antenna which is designed to be used by soldiers and the military, and according to BAE it will transform the way soldiers communicate on the front line.

The new body wearable antenna 9BWA) will be able to transmit voice and video as well as GPS location information, and it is designed to lighten the load that soldiers have to carry with the antenna weaved into fibres in the soldiers uniform. 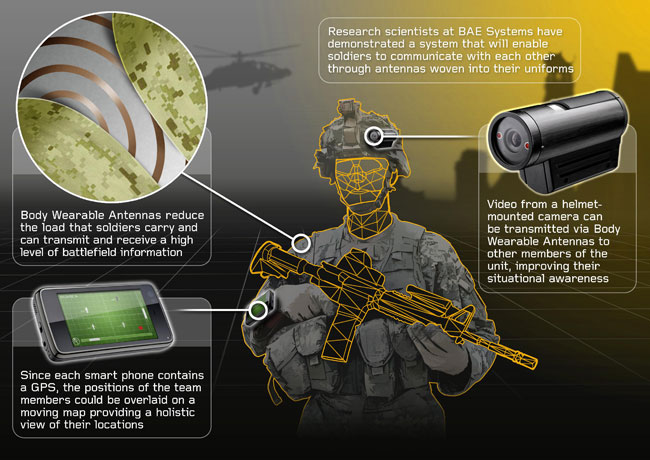 A system using this technology could improve the situational awareness of a military team as a whole, allowing soldiers to see through the eyes of their team mates in real time. If one soldier spots a situation, they can alert the team and share what they can see through their helmet mounted camera. The demonstration system links with a wrist-mounted commercially available touch screen smart phone and utilises its sensors to provide an augmented operational picture, allowing the team to tag objects, such as potential hazards which will appear highlighted on the phones video image.

There are no details as yet on when the body wearable antenna will go into production.