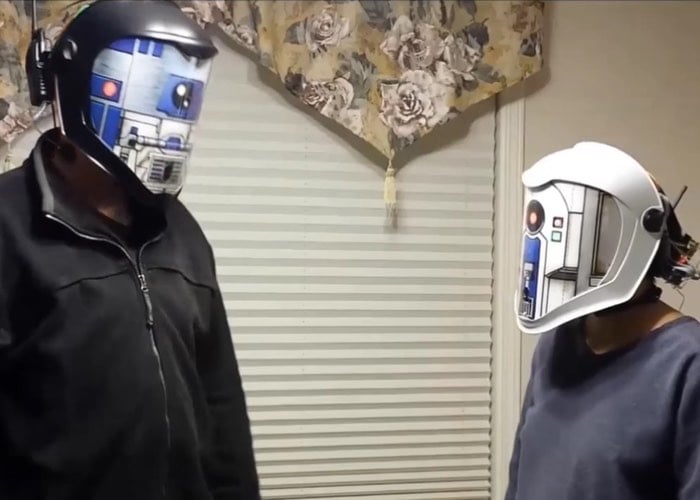 Star Wars fans are sure to enjoy these DIY Star Wars helmets that are capable of translating your voice into droid speak in real-time, using a little magic.

As soon as you start talking whilst wearing the droid helmets your voices automatically changes into droid giving the appearance that you are conversing in droid. Check out the videos below to see how they function and the magic behind the illusion.

The creators explain more about the functionality of the Droid Star Wars helmets and some of the limitations and features as well as the magic behind the effect.

First, an important detail. These helmets really do work, but like special effects – they are using some smoke and mirrors. The Droid “language” being emitted is meaningless gibberish. There is no actual translation happening. To get the effect, this is what happens behind the scenes:

– The helmets sense when you are talking and emit “Droid” instead.
– Your voice is picked up with a Laryngophone (throat mic) which is not only immune to ambient sounds (since it doesn’t use sound waves) but it works even if you speak very quietly. When you speak quietly from behind the helmet, no one hears your actual voice.
– The helmets transmit your actual voice on the sly to the other helmet(s).
– The receiving helmet(s) play your actual voice directly into the ear, so no one else hears.
– The RGB LEDs embedded into the helmets aren’t just cosmetic – they represent specific activity and status reports.
– The helmets use wi-fi to coordinate with each other (communicating status to each other, establishing transmission right-of-way, and so on.)

For more information on the new Star Wars droid helmets jump over to the Hackster website website for details and instruction s on how to go about building your very own set via the link below.