At their WWDC 2013 conference last night Apple unveiled their new Apple Mac Pro system which is tiny in comparision with the older Mac Pro generation and is encased in a cylindrical case rather than the standard rectangular shaped cases of other computer systems.

The next generation Apple Mac Pro system has been built to provide a workstation that looks like no other, and yet still provides powerful workstation graphics with dual graphics cards, PCI Express-based flash storage, Thunderbolt 2 connectivity and Intel Xeon processors. 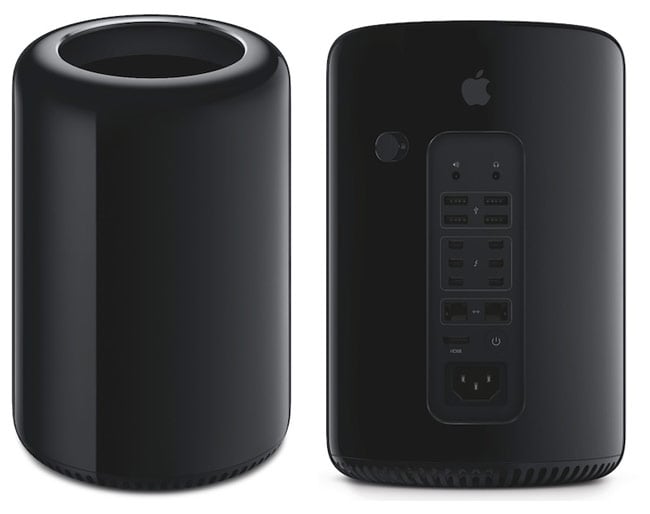 The new Apple Mac Pro is equipped with ultrafast four-channel DDR3 memory, oas well as the ability to install up to 12 cores of processing power, up to 40GB/s of PCI Express generation 3 bandwidth, and 256-bit-wide floating-point instructions.

The latest Apple Mac Pro is also fitted with PCI Express flash storage, offering up to 2.5 times faster than the fastest SATA-based solid-state drive and up to 10 times faster than a 7200-rpm SATA hard drive. Together with new PCI Express-based flash controller technology within the Apple Mac Pro to deliver the fastest solid-state drives available standard in a desktop computer, says Apple.

The Apple Mac Pro now also features dual AMD FirePro workstation-class graphics cards with up to 6GB of dedicated VRAM supporting three 4K video displays while simultaneously rendering effects in the background. To cool all this raw power inn the Apple Mac Pro Apple have created a new cooling system and ingenious unified thermal core that is built around a single piece of extruded aluminium designed to maximise airflow as well as thermal capacity, explains Apple.

An incredible amount of innovation went into designing a fan system capable of cooling such a high-performance device. Instead of adding extra fans, we engineered a single, larger fan that pulls air upward through a bottom vent. As air passes vertically through the center of the device, it absorbs heat and carries it out the top. It’s simple and elegant — and also astonishingly quiet. To achieve that, we had to consider every detail: the number of blades, the size of the blades, the spacing of the blades, and even the shape of the blades. By minimizing air resistance throughout the system, we were able to design a fan with backward-curved impeller blades that runs at fewer revolutions per minute, draws air more efficiently as it spins, and creates considerably less noise.

Ports on the new Apple Mac Pro include Thunderbolt 2, USB 3, Gigabit Ethernet, and HDMI 1.4 ports, and allows you to connect huge amounts of storage if required, as well as PCI expansion chassis, and each Thunderbolt 2 port enables you to daisy-chain up to six peripherals, offering a total of 36 external devices via Thunderbolt connectivity. 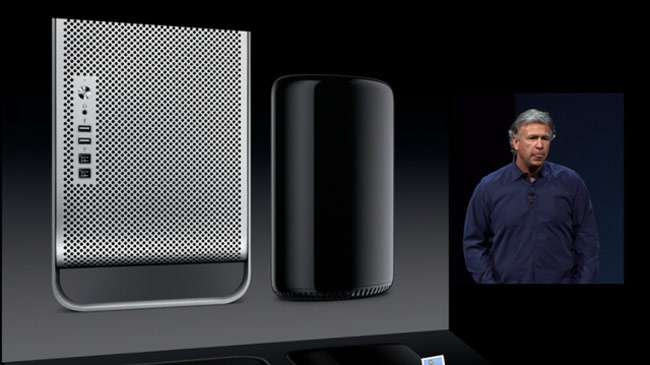 “When we began work on the next Apple Mac Pro, we considered every element that defines a pro computer — graphics, storage, expansion, processing power, and memory. And we challenged ourselves to find the best, most forward-looking way possible to engineer each one of them. When we put it all together, the result was something entirely new. Something radically different from anything before it. Something that provides an extremely powerful argument against the status quo. Here’s a sneak peek at what’s next for the pro computer.

The new Apple Mac Pro looks unlike any other computer. Because it is unlike any other computer. By rethinking the architecture of its internal components, we had the chance to rethink the entire enclosure. And since everything centers around a unified thermal core, we were free to design a much leaner, lighter, quieter, and far more streamlined structure. Its unique design and beautiful finishes are executed to an extraordinary degree of precision. And at just 9.9 inches tall with a diameter of just 6.6 inches, it’s a pro desktop computer that can actually sit on your desk.”

Unfortunately no information on pricing or worldwide availability has been released as yet for the new Apple Mac Pro, but it is expected to officially launch later this year, so start saving now if fancy one.