After nearly two years of rumors, Amazon has announced the company’s first smartphone. And it looks like it might shake things up a bit this year. The Amazon Fire Phone has a 4.7-inch HD display optimized for one-hand use, that has 590 nits of brightness and has been optimized for outdoor viewing. It also has Gorilla Glass 3 on both sides and aluminum buttons.

The device weighs just 5.64 ounces and is 0.35 inches thick. It has a 2.2GHz quadcore processor with Adreno 330 GPU and 2GB of RAM. As well as 32GB of onboard storage. It also sports a 13 megapixel rear camera with built-in optical image stabilization and has two stereo speakers with Dolby Digital plus. Want more? Read on.

The Fire Phone is powered by Amazon’s forked Android version called Fire OS. Version 3.5 of Fire OS has “active widgets” that show recent activity in apps as you swipe. Also supported are X-Ray and ASAP. One lets you “fling” videos to an Amazon TV, the other predicts what users might want to stream and pre-caches it so that the content plays flawlessly. Both are really nice features that will see a lot of use from those who use Amazon products. 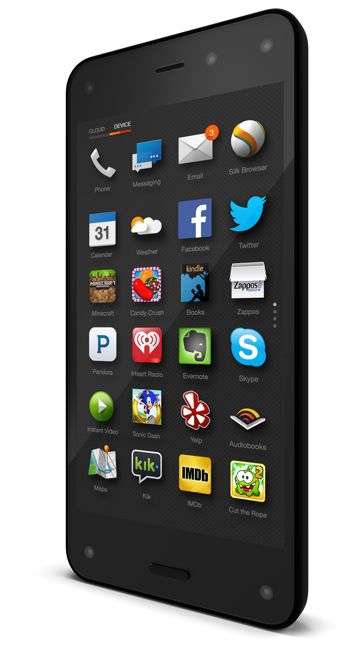 On board you’ll find HBO Go, ESPN, Hulu Plus and Netflix. Amazon’s new music streaming service, Immersion Reading and Whispersync for Voice are also here. MayDay will help you figure out features or settings on the device. The service connects you to a representative who will help you out over a live video chat session.

Firefly is an interesting feature. Again, geared toward Amazon’s current user base. It can recognize real world objects and digital content like TV shows and movies. It scans the product through the rear camera and keeps track of everything you’ve ever scanned, and gives you links to purchase those products from Amazon.

The Amazon Fire Phone is an AT&T exclusive. Pre-orders have already begun. You can purchase it for $199 with a two year contract. or on AT&T Next for $27 per month with zero down and no activation charges. The 64GB model is $299. The Fire Phone ships on July 25th.