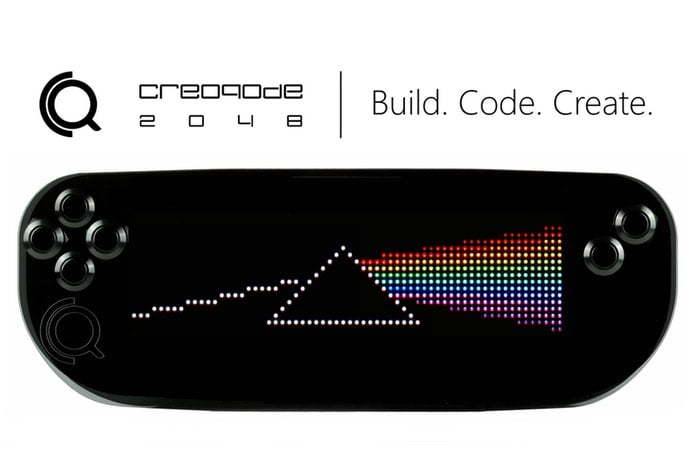 Anyone looking to learn more about coding and creating video games may be interested in the new DIY open source games console called 2048 which has been created by 2048.

The name refers to the special screen that the game console is equipped with that is constructed from 2048 individual LED bulbs that are placed in a matrix form offering a 64 x 32 resolution.

Learn more about what is possible using the open source games console from the developers at Creoqode. Who was taken to Kickstarter this week to raise the £20,000 they require to take the hardware into production. Early bird pledges are available from just $99 with delivery expected to take place during December 2016 with worldwide shipping available if required.

Creoqode development board uses an Atmega 2560 R3 chip as the processor. The pins of the development board are specifically designed for 2048 and allow an easy plug-and-play platform for creativity. Creoqode gives users a complete freedom as any type of sensor could be plugged into 2048. For instance, it can be used as a custom music visualiser by using a sound sensor, or even be converted into a remote control for a drone.

2048 is a great chance to learn about hardware. Creoqode allows users to understand the working principles of a game console’s components and encourages them to find new ways to customise their 2048 by adding new sensors and gadgets. Extensive knowledge about electronic devices will be gained in an enjoyable way. 2048 is ideal for users who are eager to create their own custom game console.

To learn more about the full specifications of the open source games console jump over to the Kickstarter website using the link below.